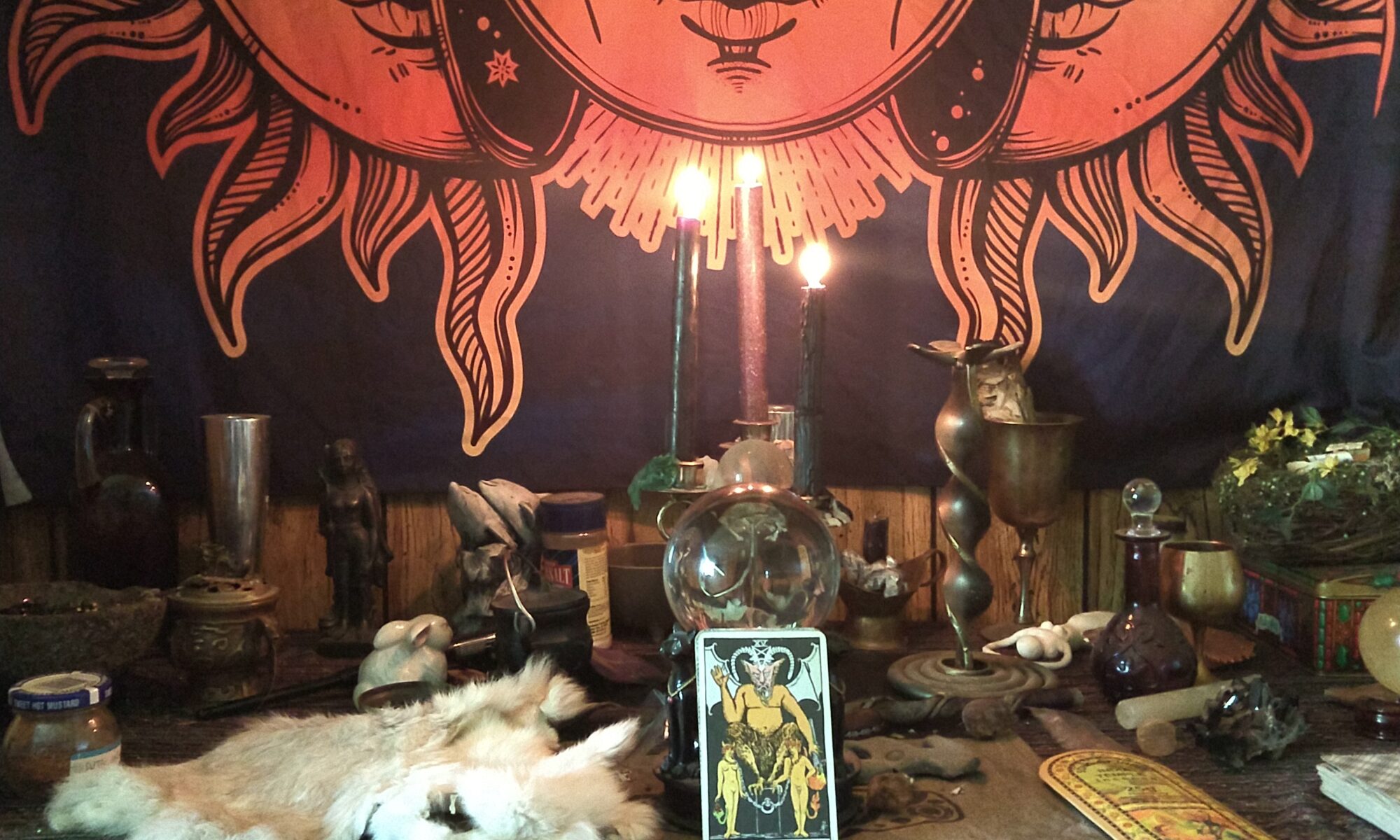 That is a question that continues to be hotly debated on social media. There is a lot of “who gets to decide that and why?” type of questions that go along with it too. The answer also depends on culture, pantheon, and personal beliefs. So, you may be asking why bother to attempt to answer such a question?

Well, as a Leader, Elder, Author, Priestess, and practicing Witch for over 50 yrs, and because I am in about 40-50 “witch” groups on social media, I see many looking for direction and firm answers. This is my attempt to answer some of these questions in bulk.

I will begin with an analogy. If you fill a glass half full of water then pour in oil and keep pouring in oil, eventually the oil will push all the water out of the glass. All that will remain is oil.

Meaning a thing still has to have the basics that identify it as what it is, in order to still be that thing. The word Witchcraft brings some negative things to mind thanks to hundreds of years if not thousands of years of people saying it is working with the devil or evil. Witchcraft can be a big scary word but in fact, it is very simple.

Witchcraft also has basics that identify it as Witchcraft. Witchcraft is generally defined as a nature-based religion, that uses magic and psychic skills to be in tune with nature and the world.

A practitioner of the craft may invoke an element or God or Goddess or attend a ceremony or ritual that is magical or work them on their own. Witchcraft is the practice of what the practitioner believes to be supernatural skills and abilities, such as the casting of spells and the performance of Magic.

My family tradition defines Witchcraft as one that uses Magic and Psychism to work with all forces of nature, energy, spirit, and deity. In our tradition, a Witch is also an herbalist and healer that employs all wise craft.

Paganism is a big umbrella that covers a wide variety of beliefs. Just like the umbrella of Christianity covers being Catholic, Lutheran, Baptist, and more. Being a Pagan does not mean one is a Witch.

Pagans love nature and this planet. Many feel at one with it and are very in tune with the cycles of the seasons. They often find joy in the small things the planet has to offer such as a bird singing or a honeybee, and it brings them joy and knowledge.

WICCA (Greek derivative for wise one)

Wicca is often defined as contemporary witchcraft and is recognized as a religion. I do not think there is one finite definition for Wicca. The definition I give here is a conglomeration of definitions. However, it is frequently characterized by the worship of deities called gods and goddesses. It contains the belief in the superiority of the mother goddess, who represents nature, emphasizes harmony with nature, and tries to appeal to this harmony.

Wicca uses ceremonies, rituals, and amulets, and more for those who are also Magical practitioners. There is a belief in life after physical death known as the life, death, and rebirth cycle. The harm none and rule of three-fold are part of their precepts. They practice reverence for the earth, the wheel of the year, planetary consciousness within their system of Magical practices. Some, but not all, of what Wicca practices are also identifiers that make Witchcraft, Witchcraft.

Neo-Paganism is an eclectic modern movement that began in the ’60s that is primarily concerned with revived and reconstructed pre-christian nature religions and mystery traditions. It draws its base from a wide spectrum of people, who may or may not be Wiccan. Many Neo-Pagans are interested in the occult revival, environmentalism, mythology, spiritual awareness, and comparative religions.

So, what is Magic? Magic is the application of the will or manipulation of natural but hidden forces like energy,  the spirit of something, deity, and other spirits, the elements and more, to affect change using means not understood by science.

Magic is the ability to effect change in accordance with one’s will by invoking things outside of the five physical senses. Such changes are accomplished through ritual, spells, energy work, and more, in which cosmic powers, deities, or other non-physical beings or the forces of nature are invoked.

Magic is using one’s higher state of consciousness and will. To do this we utilize psychic skills that use the energy emanating from our body and from things outside ourselves to manipulate and interact with other energy patterns according to our will. Most of us call this manifesting. Manifesting is an identifying part of magic but not the sum total of Magic.

One identifier of magic that makes Magic, Magic is the belief that Magic is both real and possible. This involves the idea that the physical world is only part of all reality. Another is the belief that humans have more than just five senses, there are psychic senses. It is by means of these psychic capacities the realms beyond the physical are often contacted. It is believed that these psychic senses are innate in us all and can be reawakened.

Another identifier of Magic is that thoughts are a tool to be used. Thoughts are real and have power. This is a fundamental of Magic because the mind is the power of Magic. To have great strength of will and focus is most important for a person doing magic.

Magic will be powerful or feeble in proportion to the energy, willpower, and focus used by you. Magic is what we do with what we sense. Spells are Magical and used in Witchcraft, but you could not do them without being able to tap energy and vibration. Magic happens for three reasons, what you think say and do.

Thought becomes visualization, focus, an idea, or a goal. To say is incantations, mantras, chants, spells, songs, or poetry. To do is, burning a spell and sending it off, committing a spell to any element to carry it to the cosmos or gods. Dancing, singing, putting something on an altar, lighting a candle, incense anything you do to affirm the idea or goal supports this aim.

Spells are much the same, with them you decide on a goal, they are the art of aiming. You aim at the goal with your will then you send it by using the ways described above, but it needs to be sent to be effective, sending is the do part.

Metaphysics is the branch of philosophy that studies the first principles of being, identity and change, space and time, causality, necessity, and possibility. It includes questions about the nature of consciousness and the relationship between mind and matter.

I add this topic because magical practitioner’s use metaphysical means as tools in their Magic and Witchcraft. As you can see from the definition the metaphysical by itself is not Witchcraft or Magic.

Metaphysics includes meditation, mindfulness, and any means that help clear and build one’s consciousness. It is a practice of the mind in an effort to make one more calm, focused, and spiritual. All of these practices are tools that help one build a strong mind that can be used in Magic, Witchcraft, and Psychism.

Many psychic skills are used in Witchcraft and Magic. Some folks have the ability to sense energy or deity and other things happening around them. They feel it and know it is there. This is often referred to as intuition. I believe it is part of the clairvoyance and clairaudient skills. To sense clearly allows you to be aware of your surroundings.

We all vibrate, vibration is energy. People and the earth are vibrational energetic entities. To feel the vibrations around us and be able to use it, absorb it or send it, is Magic and a psychic skill combined.

Psychism itself is the ongoing study and practice of all things psychic. So, let’s look at what some of the psychic skills are.

Clairaudience is the hearing of sounds, music, and voices not audible to normal hearing. It can manifest as an inner sound or inner voice that is clearly distinguishable from one’s own inner voice. The voice may be unknown but perceived as coming from a certain spiritual source, sometimes receiving important or useful information from the other side, or hearing vibrations of events past or future like an echo.

Clairvoyance is the perception of objects, events, or people seen visually in your mind’s eye. It is clear seeing. This kind of seeing may manifest in the internal or external visions or the sensing, of images. It appears to be a general ability among humans. In its highest form clairvoyance is the viewing of non-physical planes, the astral, the etheric, and spiritual worlds of which there are many.

Those with Clairsentience can feel psychic stimuli in their bodies. It might be a gut reaction like getting punched, or it may be felt in other parts of the body. This type of skill is often accompanied by anxiety or is mistaken for anxiety because there is a great compulsion to respond to what is being felt and what is being felt is not always easy to determine quickly.

Precognition is described as the prior knowledge of events. A precognitive will know that the phone is going to ring and who is on it, or that a certain event is going to take place, minutes, hours, or days before it happens. Precognition shows up often in daily life and in dreams.

Tarot, crystal ball, tea leaves, runes, or any other form of divination can act as a pump to prime your already natural ability. The archetypal characters of the Tarot get into the subconscious mind and wake it up, which in turn enhances our psychic perception. The eventual course of study and practice of Tarot will lead us into our own psychic ability.

The skills I have mentioned have been considered Magic by many, to separate the two is a splitting of hairs. The difference is that psychic skills and metaphysical skills are tools we use in Magic and Witchcraft. We use them to build a strong mind as we develop our will and focus and practice our Magic.

For example, if you want to send a thought or energy to someone, that is magical, but you use telepathy, and meditational focus, as the tool to send it.

These are all skills that we can build up with practice, it will only make our Magic stronger and open up the ability to sense things around us. You need only to pay attention to the feelings you get when it is a psychic moment and note the difference when it is not. The more you pay attention to what is either magic, witchcraft, psychism, or metaphysical, the more you will know the differences and they will become stronger tools for your use.